There Will Be Blood

A reflection on the film Mapping Lessons, which compares colonialism and neocolonialism and their interference in the everyday lives of the Syrian people. The film had its Czech premiere at the Ji.hlava International Documentary Film Festival in 2020.

There’s a kind of custom in Arab cafés when the lights go out. Usually, a fight breaks out (which is a good opportunity to sneak out without paying for your coffee). All the regulars gradually join in on the brawl, just for the sake of fighting. In the end, someone always turns the lights back on, and everything calms down. But from time to time, the ruckus spreads and starts destroying the café’s immediate surroundings. During the First World War, Europe was an Arab café. The lights went out in 1914 and didn’t come on again until 1918. The Middle East is the neighbourhood that the devastation in Europe eventually spread to.

This is how it stands for the Syrian woman K., whose diary entries director Philip Rizk uses in his film Mapping Lessons to guide us through the last century in Syria. K. is a fictional character based on a certain woman from Nazareth who married a Russian doctor before the outbreak of World War I and spent the war years teaching Arabic in Russia. After the war, the fictitious K. returns to Greater Syria, where, with the fall of the Ottoman Empire, there is an opportunity to build small, autonomous communities. Ever since Kafka’s novel The Trial, the name K. has been connected with the impossibility of attaining justice. K. is a synonym for a conflict that is beyond one’s power. However, in Kafka’s later novel The Castle, the character K. is a surveyor, someone who maps the terrain.

Director Philip Rizk, creator of the short film The Palestinian Life, hails from Egypt, where he lived through the revolution. In Mapping Lessons, he examines the parallels between Syria after the First World War and the Syria of recent years. Over the course of eight chapters (On borders, On names, On autonomy, On language, On oil, On self-governance, On energy, On education), he show how the West meddled in the Middle East, including the bombing of Damascus in 1925 and footage from Aleppo captured in 2011. Mapping Lessons is a documentary comparing colonialism and neocolonialism and their interference in the everyday lives of the Syrian people.

It is an activist compilation documentary, conducted in a loose, associative way using archival footage and film clips. It combines a poetic style, which reduces the narrative and is not continuous, with an essayistic style, which attempts to convey a clear message through images. A remarkable editing montage links unexpected images, achieving new meaning and obscure connections. Rizk sees through his own “cinematic eye”. 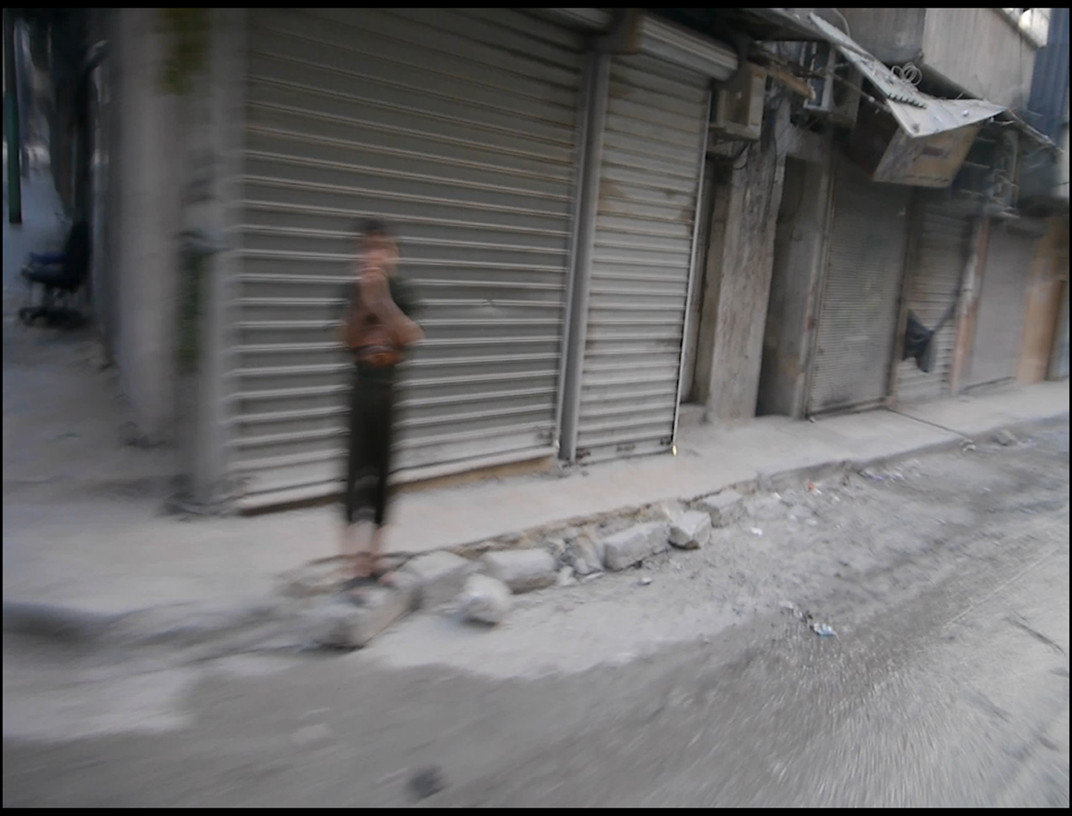 A cinematic eye full of references

And it’s clearly in Man with a Movie Camera, the Soviet à la journalistic documentary by Dziga Vertov about the manipulative power of editing and the camera, that the director finds his inspiration. In addition to using shots from Man with a Movie Camera, Rizk also references Olympia by Leni Riefenstahl, Coppola’s Apocalypse Now, Tarkovsky’s Stalker, and Herzog’s Lessons of Darkness. Excerpts from Westerns also feature prominently, particularly at the beginning of the documentary.

And it’s no accident. The café free-for-all mentioned in the introduction evokes the brawls in Western saloons. Nevertheless, that’s not the most important parallel. What’s typical of Westerns? Exploration and conquest. Settling the land. Often uncompromisingly. And the ruthless and determined advance of the American people against the indigenous population. The similarities with (not only) American involvement in the Middle East are more than apparent here.

Rizk attempts to enrich the standard narrative of the war in Syria by showing the power of autonomy and self-rule – in short, the ability of people to provide for themselves without a centralized government. In this way it would be a kind of reverse Western, with the Syrian government withdrawing from the territory rather than expanding. It harks back to traditions that could be built on: the people’s councils after the fall of the Ottoman Empire, local administration in the 1920s, and the ingenuity of the people suffering under the seven-year siege of Daraa or those cut off from electricity in Aleppo who improvised methods of heating food using solar energy. 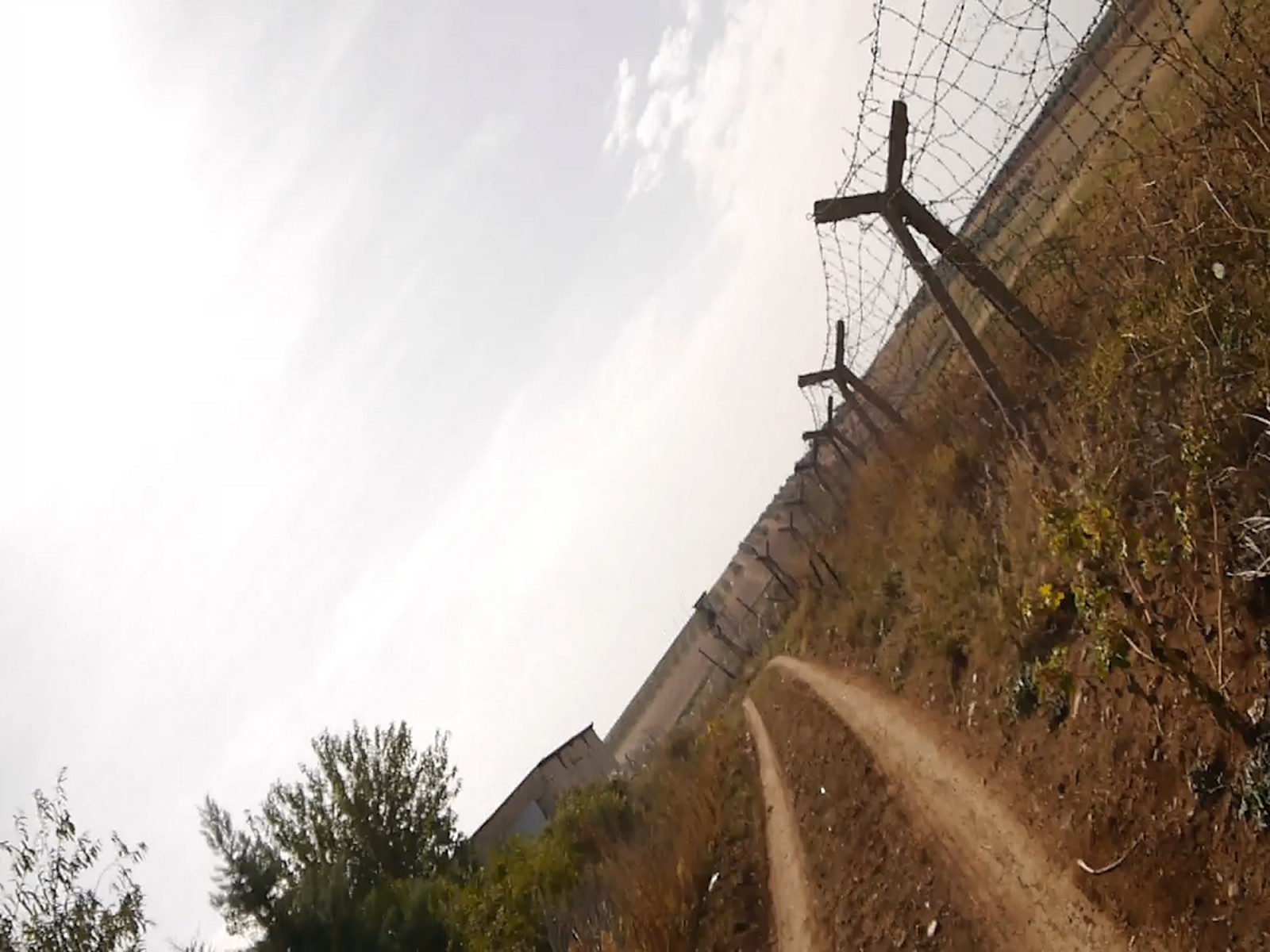 After their victory in 1920, the French abolished self-government. And any destruction the French didn’t manage was accomplished by the British. Nothing sums up the insensitivity of European states toward the Middle East quite so aptly as one cynical joke and one treaty. The fatal joke, cracked by David Lloyd George at the Paris Peace Conference, went something like this: “Is there anything interesting in Syria? Nothing? Ok, then the French can have it.” And the fateful treaty was the Sykes–Picot Agreement, a secret agreement regarding the calculated partitioning of the Middle East, which was only made public by the Soviet newspaper Pravda, as one passage in the film describes. According to Rizk, the colonizers held completely wrong notions about the nature of the territory to be divided, and the borders they sketched out reflected this.

Rizk also engages in some haphazard sketching at some points in the film, particularly in the conclusion, which slips into a nearly all-explaining mode. The fear that the fragmentary nature of the film may have failed to fully convey the concept drives the director to an extremely literal ending. Here, instead of images, scrolling credits take over for almost ten minutes, explaining the meaning of the preceding visual material, just to be sure.

And yet we’re left with questions: Is it true that all local administrations are good, and all centralized governments are bad? Is the entire concept of borders bad, or is it only those ignorantly drawn and imposed by colonizers? Is that image of the first Jewish settlement in Palestine pure criticism, or is it also an example of how a piece of territory can be administered? Can’t borders also unite us? In her book Vita Activa, Hannah Arendt writes that a table is something that both separates and unites. Aren’t there cases in which state borders can serve a similar constructive function?

Rizk is certainly not one-sided. He builds a feeling of symmetry between the post-war period and the present using footage of French planes dropping propaganda leaflets (just think of the opening shot from Nolan’s Dunkirk) and clips of Assad’s planes doing the same. Even the slogans are similar. The situation is also reflected in one of K.’s diary entries: “Whether it was a dream of the future or of the past, I cannot say.”

Let’s return for a moment to that opening allegory. The Middle East was condemned by the European colonial powers to remain in the dark. Oil is a source of bloodshed, and of all the films about the settling of the American West, there is one that in its very title recognizes the dark connection between oil and blood, and that is There Will Be Blood. Because that dark liquid that was to be consumed without payment wasn’t coffee. It was oil.

In the billowing night