Stones from space and meaning of life

Behind the search for abundant fallen meteorites in the Moroccan desert lies the fragments of human complexity. That´s what tells us Adnane Baraka in his documentary Fragments from Heaven that was screened at Locarno film festival.

Humans have been fascinated by stones from the skies for hundreds of years. Over time, meteorites served those who found them, either as ceremonial and religious objects or as scientific discoveries. As a result, people searched for them all around the world. They still do. Adnane Baraka, in his documentary Fragments from Heaven, films two men as they search for outer space stones. The film was shot over several periods between 2017 and 2019 in the Moroccan desert, famous for its meteor showers. Thanks to the meteorite fall, the deserts of southeast Morocco are a perfect place to find these pieces from heaven.

The film tells the story of Mohamed and Abderrahmane, roaming the desert and looking for stones fallen from the skies. Each has his purpose for this search. Mohamed is a nomad who lives with his family in a desert tent. He hopes to find the meteorites to improve his family’s life. On the other side is Abderrahmane, a scientist searching for these stones to pursue his research on the origins of the Earth and life itself. 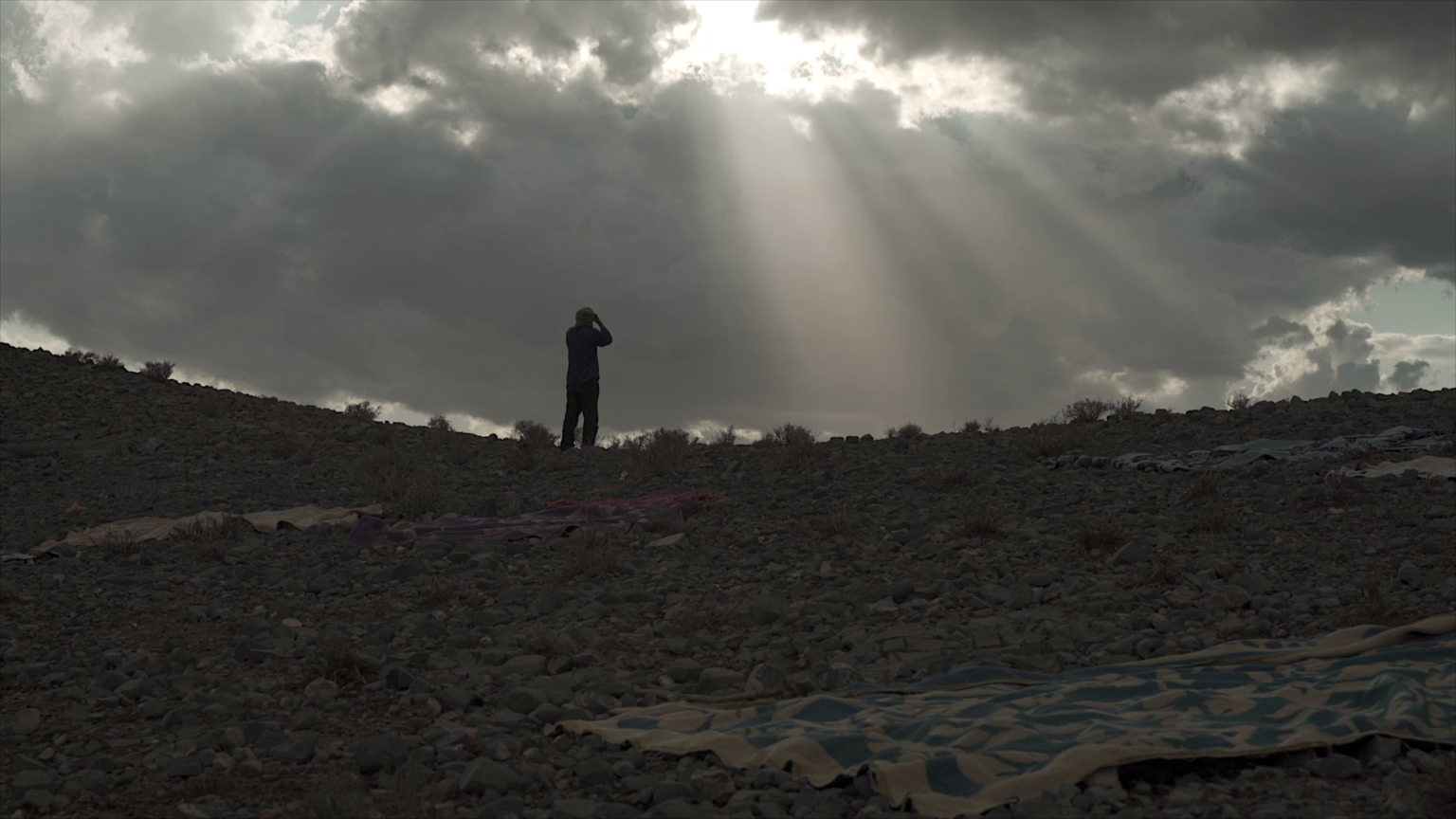 These men couldn’t be more different from each other. One is a nomad the other one is a scientist. Along with his companions, the nomad looks for the meteorites with his bare eyes. The scientist is alone and uses modern technology to find those stones from space. Baraka embraces the desert. It is as if we could see and hear the stillness and quietness. Even the background music is more of a white noise that only pushes forward this feeling of emptiness where all you can hear are your own thoughts.

The nomad and the scientist

Mohamed lives in the desert with his wife and sons. We see his interaction with his family. We hear their dialogues. But we are not a part of it. We hear them talk, but we only see their faces while they walk through the desert without moving their lips. And maybe my first observation wasn’t correct. Maybe because of this, we are more part of their dialogues than if we just saw them interact directly. This gives you the feeling of being inside their heads. Like you are reading their thoughts that aren’t meant for your ears. Those thoughts are meaningful. They are thoughts about life, the future, and the past. We don’t see this technique used when the dialogues are mere directions.

„We are searching for so long that we don’t know what we are looking for anymore.“

In opposition, the scientist is portrayed working in his lab, talking with his assistance directly. We never see him interacting with his family; however, we see him teaching his students. He is asking them if something may be created from nothing. Students are trying to come up with an adequate answer. We don’t get to hear voices not matching the movements of their lips. But when the scientist starts to talk about the meaning of life, of what was before the Big Bang, we suddenly don’t see the professor speaking; he’s out of focus, and we only see his students intensely watching him. After a while, he disappears from view entirely and, at the same time, still talks about the time before the Big Bang. While the nomad and the scientist are shown as two fundamentally different people, their words are shown exactly this as thoughts when expressing their thoughts about life.

The film concludes with an unbelievable and abstract journey in space. We are shown eruptions on the Sun, meteorites hitting the surface of the Sun, and death planes that collide with the Sun. Everything is very abstract, and it invokes many questions. Is it showing us the future of the Earth? It’s death when there is no more life, and it finally collides with the Sun. Or is it the past when the universe was only just forming? Is it the present where in a galaxy far away, there are collisions between stars and planets that form meteorites which, after travelling through the empty universe, end up on our planet like fragments from heaven? At one moment in the film, Mohamed asks: «What are we searching for in this never-ending journey?» And indeed, that is the main question.

Growing up too fast