Recently passed, far from over

Jihlava International Documentary Film Festival 2020 offered a small overwiev of latest political protests in the Special Administrative Region of Hong Kong. Two noticeably different films Stay if You Can, Go if You Must and Hong Kong Moments offer complementary perspectives on the same topic.

This year's program of Jihlava International Documentary Film Festival offered an unintentional, but nevertheless relevant small-scale overwiev of last year's political protests in the Special Administrative Region of Hong Kong. Two noticeably different films, in terms of approach to the topic, length, and style, demonstrated the power and quality to be comprehended as complementary perspectives on the same topic. A short experimental piece Stay if You Can, Go if You Must (2019) by Elysa Wendi, a Hong Kong-based video artist, in an abstract introspection of current events, provokes the viewer's reflection on Hong Kong’s protests and also constructs the interpretative space for the second film about Hong Kong's political turmoil in this year's program. Shot and narrated in a classic documentary style, Zhou Bing's Hong Kong Moments (2019) is an hour and a half long meticulous sociological study of diverse communities whose actions of protesting or, on the other hand, „defending“ the city by using police force, affect each other's day-to-day activities. It is indeed compelling to perceive them as an attempt to apprehend the existing polyphony of personal narratives and ideologies and to transform it into a unified viewing experience. Hong Kong Moments, as well as Stay if You Can, Go if You Must, could offer us a broader, and an even more coherent picture of the current crisis in the region.

Stay if You Can, Go if You Must

Of the two films mentioned, it is the latter that gives us an actual intense depiction of a person's inner state in relation to the unfolding of Hong Kong's crisis in the streets. Almost as in a form of a gallery-designed video installation, the author confronts us with a pale woman's face covered in a thin layer of ice, her gaze fixed upon the camera. Her paralysis and inability to express any emotional reaction are almost mesmerizing, while glimpses of sensorial activity are only limited to her gaze. The constant, undefined echo is slowly getting intensified, gradually evolving into the sound of the street demonstrations in Hong Kong, following the black & white footage of the heated protests. Gradually we find ourselves on the avenues of Hong Kong, gently looking down at the front-line protesters, but not being a part of the mass. Our gaze is distant, as being immersed into someone's daydream, and the feeling of inertia and imprisonment is vivid. The subjective, indirect, almost hidden camera focuses more on the atmosphere than on the event itself with the goal of apprehending the relationship between the protesting masses and an individual's emotional response to it. Wendi takes us to the pale woman's cognitive and emotional system which contemplates the historical, ethnical, and socio-political complexity. Multiple-layered footage of a traditional ceremonial drummer merges with the scenes of Hong Kong protests, forming a compelling collage of the experienced reality. With this clever narrative composition, Elysa Wendi offers a possibility to comprehend a much wider, more complex and historically-aware context of demonstrations in Hong Kong, while also keeping in mind the film’s introspective and personal approach. By juxtaposing the footage of Cantonese cultural heritage with the one of present-day protests - the event which, in its core, fights against the forced cultural unity with the Mainland – Wendi tries to contextualize the protest and draw attention to its historical complexity. Because of its experimental nature, Stay if You Can, Go if You Must unlocks the potential to perceive familiar events in an unconventional manner and ultimately shows much-needed sympathy and understanding for the city’s existing polarity of voices and political views in its troubled times.

A similar acknowledgement of the multiplicity of perspectives is immediately evident in Hong Kong Moments' in medias res opening. Zhou Bing's film starts with several testimonies about the overall atmosphere in Hong Kong that slowly lead us to the depiction of the first of its seven protagonists – a middle-aged man named Ray Nga, a member of the vast community of the city's taxi drivers. Being a part of Hong Kong's working class, Ray Nga is hardly in the position to engage himself in various discussions and protests about the government's resolutions. He's been in the taxi business for more than a decade and, as he says, „business hasn't been so bad since SARS“, which is a clear indicator of the fragility of the city's working class. In one scene, crucial for understanding Hong Kong's versatile socio-economic structure, Ray Nga is having lunch in one of the long-established Cantonese bistros on a busy Hong Kong avenue. While commenting on current events, Ray expresses his frustration and adds: „Your [the protesters'] democracy interferes with my living! I call it authoritarianism, not democracy!“ Ray's statement once again confirms the fact of politics being frequently reserved for the (Hong Kong's) privileged class, the ones free from basic existential worries. This is the harsh and long-standing reality of lower-middle and working classes around the world, and the reason for their perpetual exclusion from politics and decision-making process.

This moment, like many others in Bing's film, also reminds us of a constant multiplicity of voices and perspectives in what is perceived as a unified experience of socio-political unrest. To juxtapose Ray Nga's perspective with an entirely different one, we encounter a frontline protester named Ah Bau who vigorously fights every day to, as he says, „protest against injustice”, referring to the Extradition Bill and Hong Kong's Chief Executive Carrie Lam's inertia towards China's pressure. In short, the Extradition Bill came to the public's attention after being proposed in February and published in March 2019 in order to authorize transfers of fugitives not only for Taiwan but also for Mainland China and Macau, which were excluded from the previous version of the law. The proposed law is regarded as a direct threat to Hong Kong’s democracy because it enables the prosecution and severe punishment of dissenting voices in Hong Kong by the Mainland judicial system. Furthermore, the bill has the potential to significantly disrupt Hong Kong’s economy and overall business climate, which means, in the long-term, weakening of Hong Kong and stronger Mainland interference in the city’s legislature. The bill triggered great protests for almost 9 months during which the once mostly peaceful and unified city almost completely collapsed and turned into a battlefield between the pro-democracy protesters and the city's police force. It is important to notice that, even though Hong Kong was an East Asian capitalist paradise for more than two decades and continued to serve as such even under the rule of CCP, who used it as a capitalist-like trading “loophole” in Mainland’s strict economic system, it became clear during these unrests that this long-lived trading utopia was based on naive and dead-end economic and political solutions. 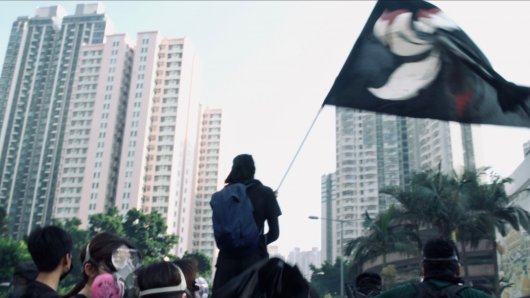 As the film progresses, we encounter several other protagonists whose socio-political backgrounds are strikingly different, but crucial for understanding Hong Kong's entangled political situation, like local politicians and small business owners whose income has drastically decreased since the beginning of the crisis. Even though a fully objective representation of a certain social conflict is an unattainable goal, we cannot ignore Zhou Bing's vast effort to carefully observe and portray contrasting social classes and opposing members of society, which is sometimes more meaningful than an ad hoc taking of sides.

Whether it is portrayed through the pro-China VS pro-democracy opposition as in Bing's film or through the clash between the individual's inner world and the outside one like in Wendi's piece, the attempt at capturing both sides opens up the possibility of a heterogeneity of voices and perspectives. Even though they present oppositional stylistic backgrounds, both films try to convey a similar credo and share similar artistic goals. Apart from being complementary to one another, the crucial point in both films is the pursuit of giving a political voice to oneself as a Honk Kong-based filmmaker, as well as to the ones having different political views. The films also demonstrate an enormous curiosity and willingness to listen, especially Hong Kong Moments, while constantly having in mind the complexity of portraying a distressing political situation. Experimenting with the notions of public and private, as well as its relations and boundaries, both films become our constant reminder to question known and seen content. As the Extradition Bill continues to threaten Hong Kong’s democracy, Wendi's engaged and conscious film offers us a fresh perspective on the situation and, together with Bing's piece, formulates a new, inspiring, and complementary perspective on the city's political crisis.

The new tendencies of Taiwanese documentary