The aim of situational review is to capture the evaluation of a particular film in its initial stage. Our interview revolves around a new Slovak film by the trio of authors Kerekes – Ostrochovský – Pekarčík, Velvet Terrorists (2013). The interview was conducted with the Czech cinematographer and emigrant living in Berlin, Štěpán Benda – among others a former colleague of Jean-Luc Godard; Tereza Reichová, a student of the Documentary Film Department, whose latest film A Terrorist Manual (2010) analyses Basque separatism on the backdrop of street graffiti and Spanish antiterrorist law; and the poet Jaromír Typlt, who was recently, and against his will, involved in a debate on engaged poetry. 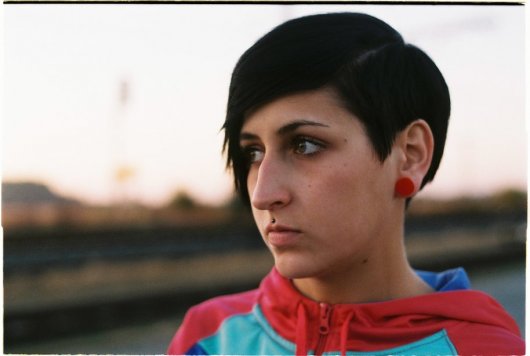 TR: I have to admit that I initially refused to take part in this interview. I have not seen the film, and I only read the annotation. I had no interest in romantic heroes fighting the communist regime. But what the film actually revealed was a big surprise for me.

ŠB: I think that Velvet Terrorists is not about the fight against the communist regime, although this theme is an element that interconnects all of the three stories. But my perspective might be too detached because I left the country in 1969 and there is also the generation gap to be taken into account. I have experienced the communist regime.

JT: Although my experience with the communist regime is much shorter, to me it is clearly visible in the film. Two of the three stories start with what today looks like a trivial expression of freedom – a desire to wear a T-shirt with the name of your favourite rock band. Who would now risk having their life ruined because of such a banality?

ŠB: I don’t want to argue, but take Easy Rider, for instance. Long hair alone was enough to be beaten up by some rednecks. But I don’t suggest that these two situations are equal. What I want to say is that this film is far from revealing the true nature of communism.

JT:  And yet it shows incomprehensible actions by people living in an incomprehensible era. Instead of devastating terrorist attacks, so successfully used by communists in their propaganda, we can only see futile, solitary and even inadvertently comical attempts.

ŠB: I don’t consider Velvet Terrorists to be a documentary film. To me, it rather seems like a self-presentation, a performance. It is clear to everyone that the authors have written most of the dialogues themselves. I know that it is trendy today and that it is even considered a very creative approach. But given the topic, which concerns me personally, I find such a method truly annoying. I guess that this work obscures the true substance of what communism was and why it was worth standing up against it.

TR: I found the film very amusing and I actually think that it was because of its filmic expression. Take for instance documentaries about concentration camps. Many people dislike them because they have heard such stories so many times. And that’s why I enjoyed watching velvet terrorists recounting their stories in diverse situations and to different people. I don’t even know whether they were actors or real persons, and frankly, I don’t care. The film works for me primarily as a documentary. That is, not in the sense of a director using a talking head that keeps on repeating its own truth, but by placing its statements in a different context. I don’t see it as a performance, but an exquisite documentary situation.

JT: I am grateful to Velvet Terrorists for what it does to defy the documentary genre. For instance, the extraordinary views of the landscape. And thanks to the fact that the protagonists have to deal with their lives just like with a film role, the documentary is more efficient in revealing their real nature.

ŠB: I think – crudely put – the authors parasite on the real stories of the characters. And I hate things like that. I admit that the cinematography is beautiful. But poorly done for a fiction film, and as a documentary film it does not reveal the truth. It’s a kind of a hybrid. A documentary in decay.

TR: I thought that we would talk more about politics than the current documentary trends. Old forms have to change to make the viewers react, to look at the issue through different lens. The merit of the film may lie in its ability to upset the audience.

JT: Take, for example, the billboard depicting a happy family, which explodes at the end of the film. It is up to date, but yet a reminder of the 1970s. That is rather ironic.

ŠB: I have to admit that I failed to see this as a symbol.

JT: Because you managed to escape the normalization propaganda. At that time, communists started to pretend that they will make sure that everyone can live happily in a family and go to work. After 1989 it was enough to open shops full of stuff and provide a bit better entertainment. Is this lie only a thing of the past?

TR: The analogy is even more apparent. The last story is a reference to how natural racism is supported in order to cover other problems, legitimizing a situation where some people beat up a tattooed girl. I agree with what she said about today’s legitimized injustice. To me, Velvet Terrorists is an activist film that makes the audience reflect on what’s happening in the present. It reveals more about anti-communism than about communism.

ŠB: And does not the sense of proportion disappear? People wearing nose rings are no longer considered weird today, unlike in 1975 when boys had problems with long hair and American T-shirts.

JT: I noticed that anti-communism is seen by the new generation as a burden that has to be shed as soon as possible. It is a pity that this society has not been taught any serious anti-communist lesson. The families of diligent and deserving secret agents successfully utilize the obtained property and influence, whereas people whose lives have been ruined, often struggle to maintain their existence. And their stories are now even seen as annoying.

TR: I agree that we have failed to come to terms with the past. However, anti-communism marginalizes the problems of the present times. Any possible discussion with the generation of my parents ends when they say: “If you only lived before 1989, little girl.”

JT: I guess I would also mind but I have to confirm that proportions get lost here. The life before 1989 is idealized by the new generation, believing in stories of a happy life and social securities. No wonder that they look at the current social disputes with utmost disgust.

TR: But we are living in the present.

JT: OK, we are living now, but, for example, the racism permeating the Czech society should certainly not be tolerated. But anti-communism is underpinned by the experience, which has not changed much. Although the communist party is a zombie, Putin still considers Stalin a living inspiration.

Translated into English by Bára Rozkošná.

Documentary film and the novel

Urge to Delve Into Underground