The unit of intensity of a documentary

“Without hospital roboticism, people would die much sooner. Then again, with it, they seem to die inhumanely. In her film Intensive Life Unit, Adéla Komrzý does not make an explicit theme of this tension, but it remains the film’s greatest possible payoff, its true discovery and raison d’être.” This is how publicist and philosopher Petr Fischer reflects on the film, which has won numerous awards, including a Czech Lion and the Pavel Koutecký Award.

Death is a banal event. Especially in the sterile environment of a hospital, it is a kind of technicality: the instruments no longer register signs of life, the body ceases to breathe, the heart stops beating, only lifeless flesh remains. Wiped down, bagged, taken to the morgue. The opening sequences of Intensive Life Unit (2021) are coldly precise and austere, which is why they are also so agonising. We don’t want this death, even though we all get closer to it every day – one of the few common certainties we can rely on in life. We want a different dying, a human dying, with feelings of closeness, of love, of introspection. But death is this – a corpse zipped up in a plastic bag.

The film’s director, Adéla Komrzý, wants to touch something we don’t know how to touch – the secret of life that lies in waiting for death. Or more precisely: she would like to touch the death that visibly enters the living bodies of terminally ill patients, who at most are told by modern medicine how much time they have left. It is a most intimate endeavour, especially because death as an experience is something that CANNOT be shared. We always die by ourselves and with ourselves; no one can help us. And so even the film, which is the antithesis of a corpse wrapped in impermeable plastic, ultimately rather follows attempts at shared dying, at the end of which await the monotonous drone of the monitor and a huge bag with an empty body. 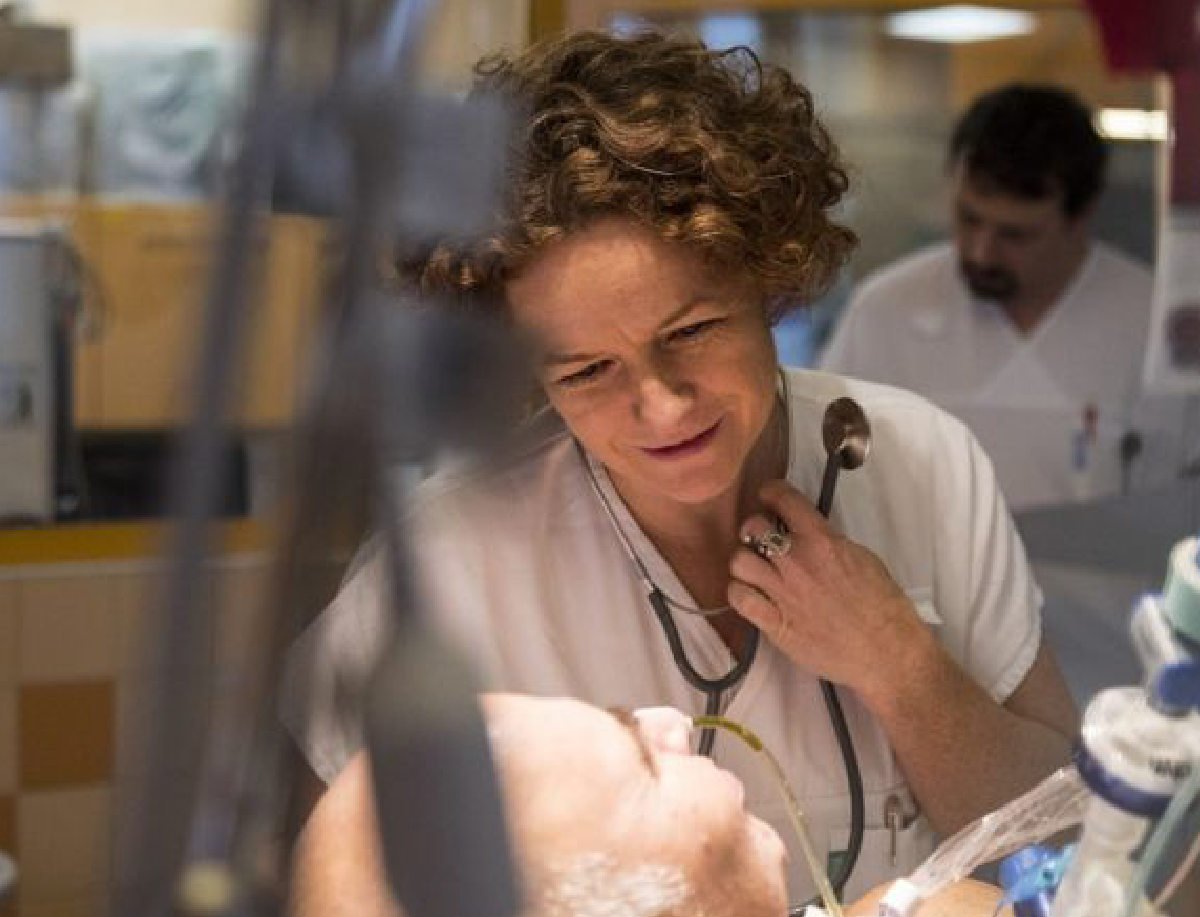 But death “makes our lives alert”, as author Jan Balabán from Ostrava once wrote; thanks to death, we can suddenly see connections and things we were unable to see before. The significant and insignificant reveal themselves differently, and suddenly we even see life as a totality, as a completed project that opens and closes, which is why what lies between the end and the beginning matters so much, regardless of how much life’s extremes (beginning/end) determine everything. The protagonists of the film… But who are the protagonists of the film? The characters that play the game of death: Ondřej and Kateřina, doctors who, through their palliative preparations, attempt to bring their dying patients to a reasonable organisation of the remaining time in their lives, or the dying, who, thanks to the doctors, take notice of their own lives and the lives of their loved ones, if they have any.

„Are we relating to the film or to the courage of its director, who has hit a neuralgic point in modern society that has been neuralgic for many decades?“

I’ll leave the question intentionally open because imposing an interpretation is somewhat inappropriate with regards to Intensive Life Unit and not at all appropriate for that unique experience of death and becoming a corpse. But if we accept the starting point of cinematic communication, which shouts to the world, “Behold, here is the film!” the heroes are the doctors, who, as the film’s blurb reads, “bring the human being back to the centre of attention in a milieu of robotic medicine and deified white coats focusing on illness as such.”

Ecce homo! So many times we are surprised; man revives something he himself has mortified and alienated – namely himself – but why actually? The film takes the robotic nature of the hospital as a negative value axiom, an unquestioned premise that is, after all, somehow self-evident. But that alienation is the fullest expression of humanity, for it is the result of the persistent human effort to save life, defined as the preservation of vital functions and brain activity. Without hospital roboticism, people would die much sooner. Then again, with it, they seem to die inhumanely. It is a tension that Adéla Komrzý’s film does not make an explicit theme of, but it remains the film’s greatest possible payoff, its true discovery and raison d’être. 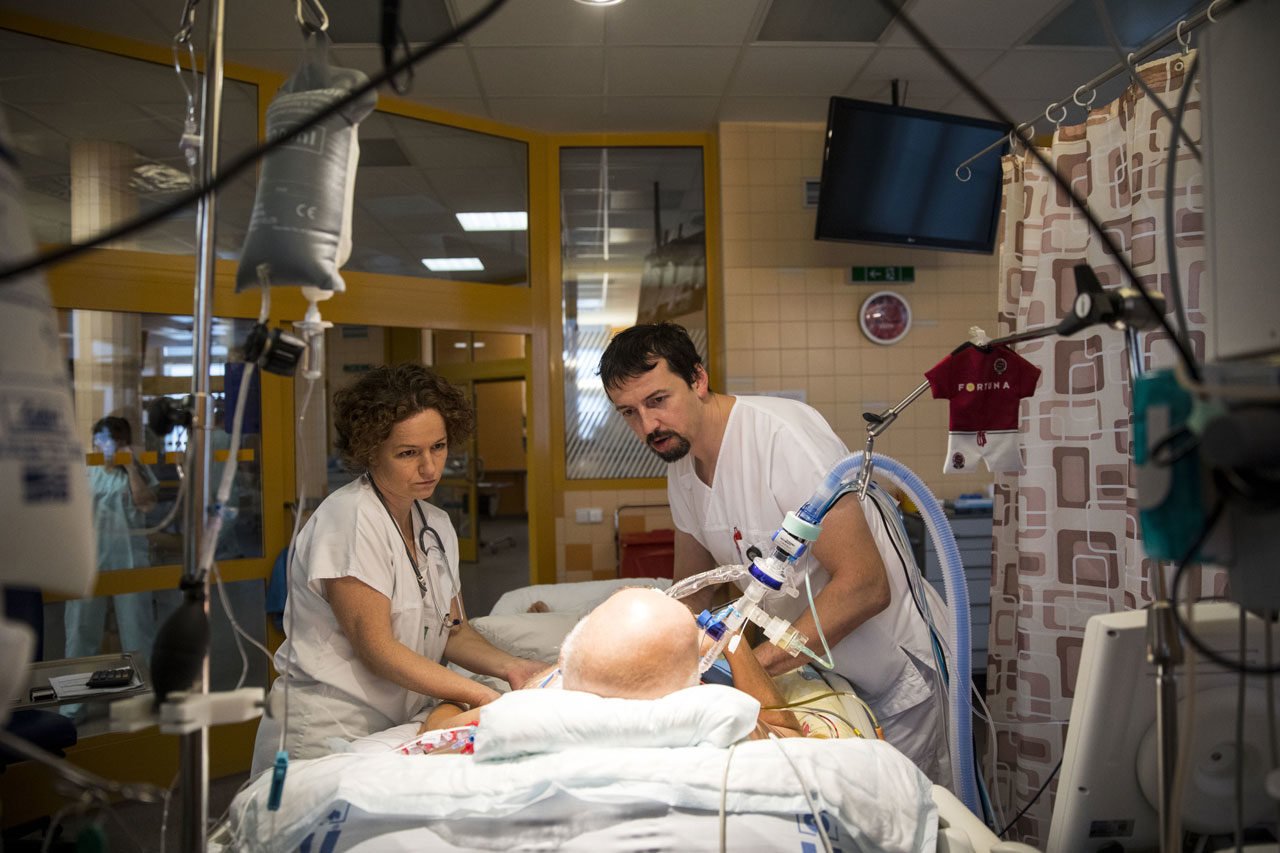 The courage to step into the unknown

After all, the two physicians involved in preparations for death – which most often resemble adjustments in time management and the organisation of interpersonal family and other logistics – do not eschew hospital roboticism. They, like all doctors, have an intrinsic professional austerity; palliative care here is not an emotional merging with the dying or a minimal dose of empathy but rather a semi-therapeutic technical guiding on the path to death. But is a psychological circumspection of the priorities of the last days of life what we call humanity? And isn’t the “good organisation” of one’s own passing simply a kind of subset of the hospital’s robotic operations? Where does it remain, where does it appear, where does it go to, and where does come from – that someone or something here that we always implicitly call a “person”? Can we somehow grasp it, or is it as impalpable and elusive as death itself?

Adéla Komrzý’s film does not want to be suggestive, but in a certain, very precise way, it is, and it paralyses everyone in the rapture of the encounter with the unknown and untouchable as we like to imagine it. The film suggests its extraordinariness and exceptionality by the very fact that it reveals something we avoid. The accolades and awards that have been showered on the film are very often motivated by this entry into the unknown, which few dare to undertake. Are we then relating to the film or to the courage of its director, who has hit a neuralgic point in modern society that has been neuralgic for many decades? This is another strange dilemma associated with Intensive Life Unit: to insert a person into the game is to disregard the film as an aesthetic object, and an aesthetic analysis of the film would in turn be too inhuman, even robotic. To connect something that cannot be connected, and yet must…

This dilemma, as irresolvable as the tension between the coldness of professional medicine and the warmth of human sharing, becomes the beating heart of the film – an almost perfectly accurate imprint of what the film seeks to explore and reveal. It is a mirror of robotic medicine, into which the “person” enters so little and yet so much. A heretical performance, disrupting the tacitly and loudly accepted idea that a documentary is not a snapshot of life but a re-enactment of it…

In praise of documentary experimentation