Havel Speaking, Can You Hear Me?

What were the two last years in the life of former dissident, ex-president Václav Havel like? How did he reflect on the fact that he was gradually leaving this world? Documentarian Petr Jančárek talks about his upcoming documentary film capturing the final stretch of Havel’s, life, the rough cut of which was shown at the Ji.hlava IDFF in the Studio 89 section marking this year’s anniversary of the so-called Velvet Revolution.

Václav Havel was and certainly will remain one of the most prominent figures of Czech history of European and even global dimensions. Being a director of his own life, his fascinating story is full of paradoxes, absurdity as well as twists and turns, often caused by the fact that he stubbornly insisted on keeping his actions in line with his consciousness and putting the common good above his own.

Who would not want to make a documentary about such a character? It was my great honour when in April 2009, Václav Havel asked me in his Prague offices whether – as he himself put it – I “wouldn’t want to record the rest of his life”. I could give only one answer to his question, although I had no idea what his proposal would entail. Havel’s co-worker Martin Vidlák wrote: “Director Petr Jančárek started to work with President Havel in 2003. He regularly recorded Václav Havel’s video greetings and speeches for Czech and international meetings and events which the ex-president could not attend in person. In 2006, we collaborated on TV trilogy Václav Havel, Prague – Castle about president’s federal days and three years later, Václav Havel suggested further collaboration with Petr Jančárek. He was absolutely open to Petr and trusted his directing and cinematography skills. Petr, on the other hand, took utmost responsibility for the collected footage, limited the number of crew to minimum, and his collaboration with the ex-president’s office and security was smooth as well as his unobtrusive presence at the recorded events.” 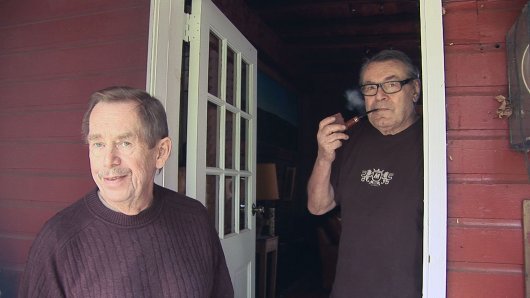 From the upcoming film Havel Speaking, Can You Hear Me?

It was not so easy to turn down all new offers and dedicate my time to Václav Havel, financing the shooting initially from my own sources and combining the work with other projects in progress… My friends fortunately helped with the funding – the co-owner of rights to the footage is the Michael Kocáb Foundation.

Havel’s extraordinary life has inspired numerous books, historical studies and documentary films. However, I am convinced that his footprint on the Czech and international scene is so unique that there is still space for many more different renditions of his life and fate. However, me and my colleagues – co-author of the script Martin Palouš and editor Jan Turek – have to find a completely new lens to look at the dramatist, dissident, politician and statesman.

"We have approximately two hundred hours of very rare footage to process, containing so far unreleased scenes from Czech and international public occasions which Václav Havel attended, his meetings with prominent figures and with entirely unknown people..."

We have approximately two hundred hours of very rare footage to process, containing so far unreleased scenes from Czech and international public occasions which Václav Havel attended, his meetings with prominent figures and with entirely unknown people. The footage captures his presidential schedule as well as his private life.

Our protagonist is able to stay on top of things and be aware of the general implications, at the same time being capable of formulating a brilliant analysis of reality. In addition to his appearances on camera and comments for microphones, he also produced his own dramatic pieces, essays and presidential speeches. Apart from our time-lapse footage, we use these works as additional sources to describe Havel's figure.

Director of his own life

I have personally always been fascinated by the fact that Václav Havel was a dramatist not only in the standard sense of the word. He was constantly sketching and staging each movement around, in his essence acting like a director from the very beginning of his creative existence, long before he started shooting his own film, Leaving. 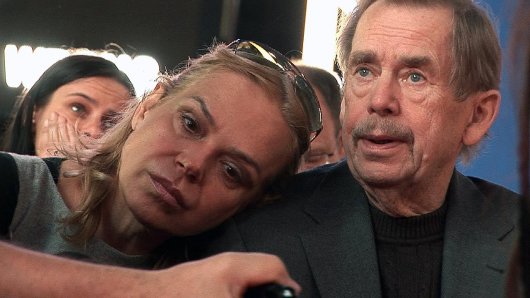 From the upcoming film Havel Speaking, Can You Hear Me?

Another quite substantial and characteristic feature of our protagonist was that there was practically no difference between Havel as a private person and Havel as a public figure. The fact that these two were identical was an obvious expression of his spontaneity as well as his profound responsibility and ingrained need of self-control. I guess that he was actually constantly struggling with his own doubts and weaknesses, which I often experienced in his company. But he always managed to immediately find his way out of these struggles – as a dissident, prisoner, politician or free citizen – being able to take a clear stance and make the right decision. This might also be the key to Václav Havel as a protagonist in front of the camera where he appeared more often and more willingly than anyone else. On top of that, he was always inspiring, witty, playful and I am sure that he never did it for the show.

We are now in the post-production stage, repeatedly watching the whole footage and discovering previously overlooked treasures and additional material for situations we are already working on. The entire process is absolutely fascinating. But there is always the ruthless reminder of the most obvious fact – that we have a raw diamond in our hands that we mustn’t destroy during the grinding. To leverage and process the footage collected in the last three years of Václav Havel’s life as best as we can is the fundamental prerequisite for the film’s success.