As Far As Possible

Ukrainian documentarian Ganna Iaroshevych describes how she has been preparing her new film called As Far As Possible. It´s a portray of a man who decided to leave Germany and lives in the Ukrainian mountains fighting against the extinction of water buffaloes. „Our film tells about an alternative way of slow living close to nature and animals, and in harmony with yourself. And it seems to us that now this topic is especially relevant to many people around the globe,“ says Ganna Iaroshevych.

The idea of this film was born about four years ago when I’ve read one of my Facebook friend’s posts about a German man living in the Ukrainian mountains and fighting against the extinction of water buffaloes. This whole scene seemed very exotic to me. First of all, I’ve never heard before about such huge and wild animals living in Ukraine. Secondly, I got stuck when I saw pictures of that man, Michel Jacobi. I was expecting someone older and more experienced… But not a 33-years-old man, dressed like a cowboy, living in a tiny abandoned farm and taking care of more than 30 rare animals. It was the 8th year since Michel has moved from Germany to Ukraine leaving all his life and family behind. Michel became some kind of a local attraction first, but then he assimilated to the place, its culture and he even learned the Ukrainian language. That image stuck in my head, so I packed my bags and went to meet Michel in the Carpathians.

In the beginning, there were just two of us - me and the cameraman. We’ve been filming Michel’s life in the village for a year and a half, coming every 6 months to spend a week or two in there. We caught Michel’s special emotional connection with the buffaloes. We went on a challenging trip to the mountain heights when Michel decided to take a risk and to follow an old shepherd’s tradition of living in the wild for the whole summer, pasturing animals, milking, and making cheese. 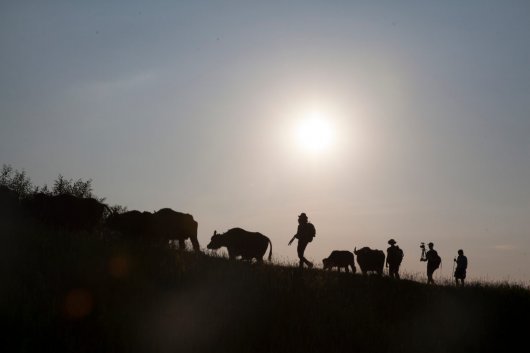 From the filming of As Far As Possible. Photo courtesy of Ganna Iaroshevych

An unexpected story twist happened when Michel went to his brother’s wedding in Hamburg and… met Vera there. Love has changed it all and Michel moved to Germany to be with his new girlfriend and her two kids from a previous marriage. The picture has dramatically changed. Our small film crew traveled to Germany, trying to capture the clash of the two worlds - Ukraine and Germany. Michel’s romantic living in the mountains in tune with nature has been replaced by the rush of the city and paperwork in the German office from dusk to dawn. I won’t spoil the plot by saying that Michel didn’t feel happy being back in Germany. And in the end, he had to deal with the choice - to stay in Germany with his love or to pursue his dream of living ‘As Far as Possible’ and saving endangered animals in Ukraine.

‘Freedom’ is the first word that comes to my mind when people ask me what this film is about. For us, people who were born and raised in the Eastern world, freedom was always associated with the Western world full of dreams and possibilities. Crazy, but for Michel, it works vise versa. Coming from a wealthy German family he finds his happiness in a distant Ukrainian village. As he says himself in Germany he feels trapped and being part of the system. In Germany, Michel is one among many others. But in Ukraine his life becomes meaningful, he has a mission, and most important - he feels free. Free to live the life he wants to, to express himself in the way he wants to, and not to be judged by others for that.

While I’ve been following Michel’s story our film crew was rapidly growing, these days we have the whole team of professionals on board and the film itself is almost done. We managed to run a successful crowdfunding campaign in Ukraine to secure money for editing. And recently our film got a grant from the Ukrainian Institute for international promotion. While the project was in progress we had a chance to present it at several doc platforms such as Lisbondocs, IDFA Academy, Beldocs, DunaDock, and Docudays.UA. This month we’re heading to East Silver Market organized by Ji.hlava IFF and in November we’re happy to be a part of Docs for Sale at IDFA. 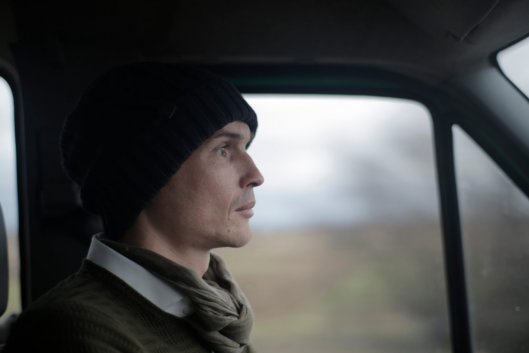 From the filming of As Far As Possible. Photo courtesy of Ganna Iaroshevych

I’m very excited that despite the fact that ’As Far as Possible’ is my full-length documentary debut, it’s highly supported by other Ukrainian artists. Songs of Ukrainian folk music band Panivalkova are now the soundtrack of the film. Illustrator artist Oleksandr Grekhov created images of our protagonist Michel and his buffaloes. And Ukrainian closing brand has created a set of themed socks, each named after one of the buffaloes, to make a charity campaign and to raise some money for these endangered animals.

Our biggest challenge in these uncertain times is to put the film out there at the festivals to meet its audience. The pandemic has forced many people to rethink their lives and values, to consider whether the pursuit of a successful career and earnings is really so important. Our film tells about an alternative way of slow living close to nature and animals, and in harmony with yourself. And it seems to us that now this topic is especially relevant to many people around the globe.

As Far As Possible

Tabor's projects were supported by Ukrainian State Film Agency, IDFA Bertha Fund, Ukrainian Cultural Fund, Doha Film Institute and Latvian Film Centre. We are experienced in international coproductions and partnerships, having participated in Polish, British, Italian, German, Latvian and American (Academy Award-nominated) projects. Film School #3, which was presented at the Generation 14+ program of Berlinale 67, was awarded the Grand Prix by the international jury.